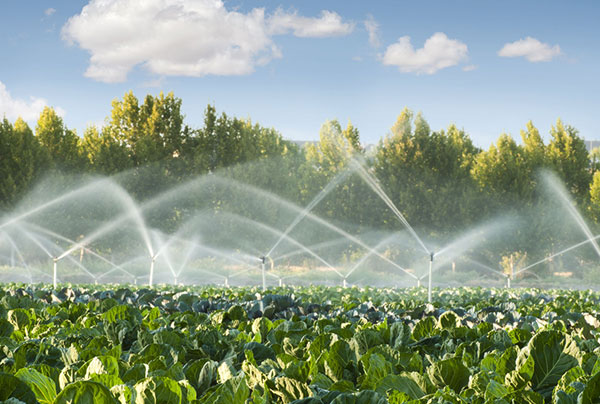 There are two main ways that farmers use agricultural water to cultivate crops:

This is the natural application of water to the soil through direct rainfall. It is fully reliant on rainfall water for irrigation purposes. Relying on rainfall is less likely to result in contamination of food products but is open to water shortages when rainfall is reduced.

This form of farming can be practiced in areas that experience rain frequently. It is most carried out in small-scale farming or subsistence farming where the farmers grow food for their own use as opposed to commercial purposes.

In resource-constrained and dry areas, farming is a survival mechanism rather than a growth oriented activity. Furthermore, rainwater harvesting often has double or triple benefits: not only does it provide more water for the crop but it also adds to the recharging of groundwater and helps reduce soil erosion.

Unfortunately, rain-fed agriculture is constrained with multifarious problems such as moisture stress, soil erosion and crusting, nutrient deficiency, depletion and poor nutrient use efficiency, and weed infestation limiting the yield potential of these lands.

Irrigation is the artificial application of water to the soil through various systems of tubes, pumps, and sprays. Irrigation is usually used in areas where rainfall is irregular or dry times or drought is expected. There are many types of irrigation systems, in which water is supplied to the entire field uniformly.

Drip Irrigation is the most efficient water and nutrient delivery system for growing crops. It delivers water and nutrients directly to the plant’s root zone, in the right amounts, at the right time, so each plant gets exactly what it needs, when it needs it, to grow optimally. It enables farmers to produce higher yields while saving on water as well as fertilizers, energy.

Sprinkler/spray irrigation is the method of applying water to a controlled manner that is similar to rainfall. The water is distributed through a network that may consist of pumps, valves, pipes, and sprinklers. Irrigation sprinklers can be used for residential, industrial, and agricultural usage.

A center pivot irrigation system is self-propelled and works with the use of a central pipe with outlets rotating around a central pivot point. It works like the sprinkler irrigation system, but it is much bigger and is supported by steel or aluminum towers. It covers a large area in a short period of time and evenly distributes the water on the farm.

Furrow irrigation is a form of surface irrigation where small parallel channels are created and filled with water. Crops are grown on the ridges between the channels. Furrow irrigation is suitable for a wide range of crops, especially row crops like corn, sunflower, sugarcane and soybean and those that would be damaged by flooding like tomatoes and beans.

Manual irrigation is by far the most common form of irrigation as anyone physically able to, can manually irrigate their crops. Manual irrigation is you moving water from plant to plant. This is very labour and time intensive and is usually done with a hose or bucket, so it is only suitable for smaller areas.

Main importances of irrigation supplies are discussed below.

Advice to farmers on the method of agriculture to incorporate

Both rain-sed and irrigation are great methods to use in growing crops. However, doing rain-fed alone cannot bring great results to the farmer. That is why incorporating an irrigation system can be beneficial in the long term. When a farmer decides to use both systems you get to enjoy more yields and overall economic growth. Mazero Agrifood has quality and affordable irrigation materials, we also have a team of qualified personnel in installation of irrigation systems for our farmers. For any inquiries on the best irrigation system to use, reach us now on 0729777711.